What I Read in January

This year, for the first time in five years, I've taken a break from teaching.  The added free time opens me up for a few things, including what I'm hoping will be at least a couple of books a month.  In the interest of not compartmentalizing, one of the books each month will likely focus on an area of business or tech that I need to learn and the other will be something wholly different. I like to read with a pen in hand. Whether it's fiction or tech-related, taking notes has always meant that a book will stay with me longer - that I'll remember more. These are the books and notes from January. 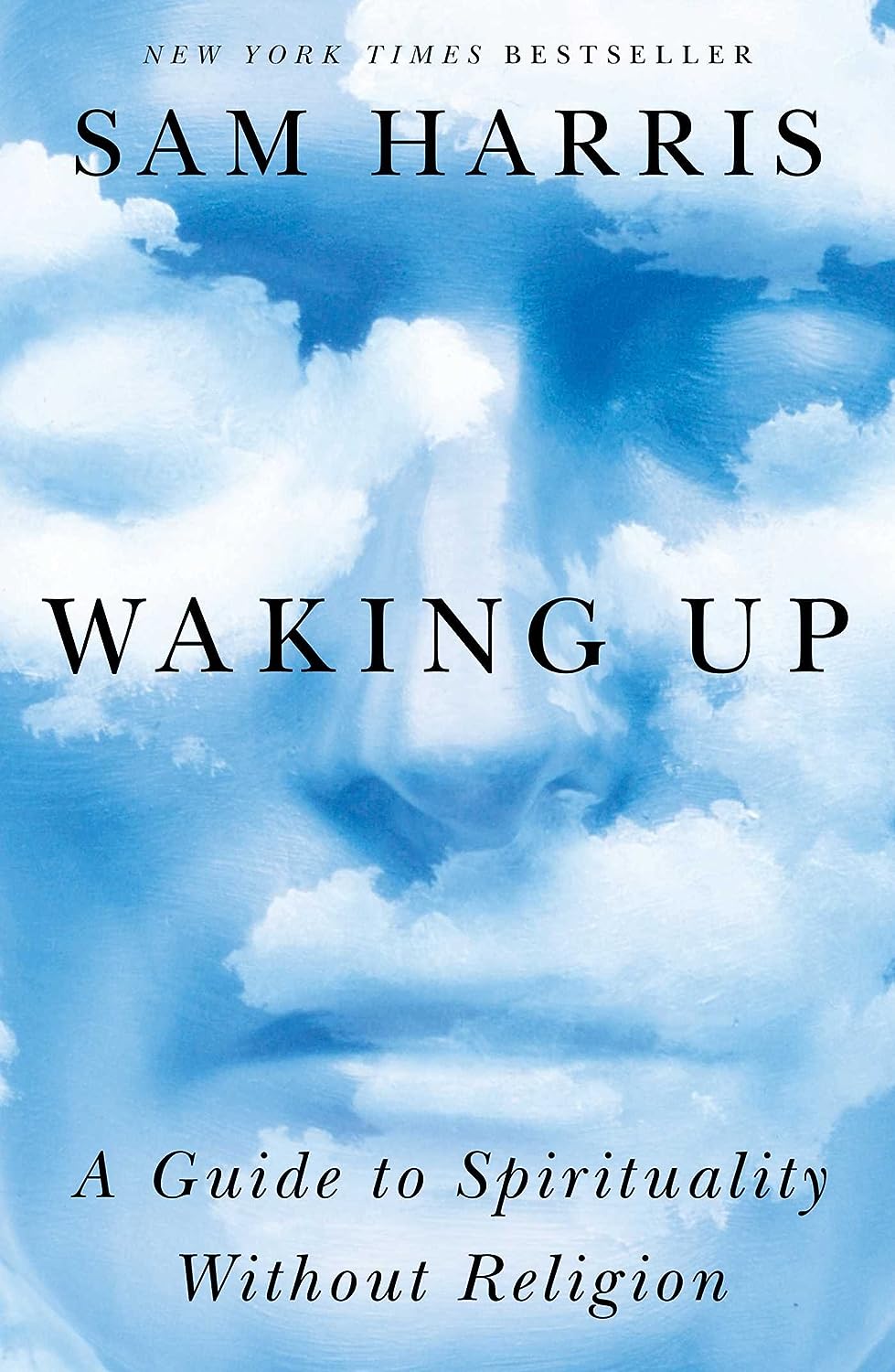 Written by Sam Harris, this book aims to take a scientific look at spirituality and consciousness. For the first third of the book, I think he achieves that. There are some studies and concepts from the first 100 pages that are really remarkable. It's worth reading just for those. He loses his footing when he gets into the latter half of the book. He doesn't seem to take the same deductive approach to the sections on meditation and psychedelics and is a bit too swept away by them to take seriously. Still, I'm glad I read it and it's worthwhile.

"Wisdom is nothing more profound than an ability to follow ones own advice."

"We seem to do little more than lurch between wanting and not wanting."

"My mind begins to seem like a video game: I can either play it intelligently, learning more in each round, or I can be killed in the same spot by the same monster, again and again."

Split-brain behavior: There is a bundle of nerves called the corpus callosum that connects the two hemispheres of your brain. In the 60s, the only known cure for severe epilepsy was severing that connection.  It was a major relief for those suffering with epilepsy, but it also had a fascinating consequence.  When you sever the corpus callosum, the left side of your brain quite literally has no idea what the right side is doing, nor does it recognize that it exists, and visa versa.  This is most apparent in the split-screen experiment.  The result is what appears to be two consciousnesses living inside of one brain. (Page 62)

Priming: Humans can perceive very brief visual stimuli, but that perception quickly disappears if they are followed by a dissimilar pattern. "For example, you will be faster to recognize that ocean is a word if it follows a related prime, like wave, than  if it follows an unrelated one, like hammer."

The connection between conscious thought and unconscious process: "Suppose we try to recall a forgotten name. The state of our consciousness is peculiar. There is a gap therin; but no mere gap. It is a gap that is intensely active. A sort of wraith of the name is in it, beckoning us in a given direction, making us at moments tingle with the sense of our closeness... if the wrong names are proposed to us, this singularly definite gap acts immediately so as to negate them."  - William James (Page 75)

Mirror Neurons: Scientists point to "mirror neurons" as the unique activity that happens in our brain when we are inferring the intentions behind an observed action. Mirror neurons are more active in the brain when we perceive we are being watched and in interactions with others. It is likely a factor in self-consciousness. "It is certainly suggestive," Harris writes citing this study, "that children with autism appear to have diminished mirror neuron activity in proportion to the severity of their symptoms."

Equanimity: Mental calmness
Discursive: Digressing from one subject to another
Gossamer: very light or unsubstancial.

Hooked: How to build habit-forming products 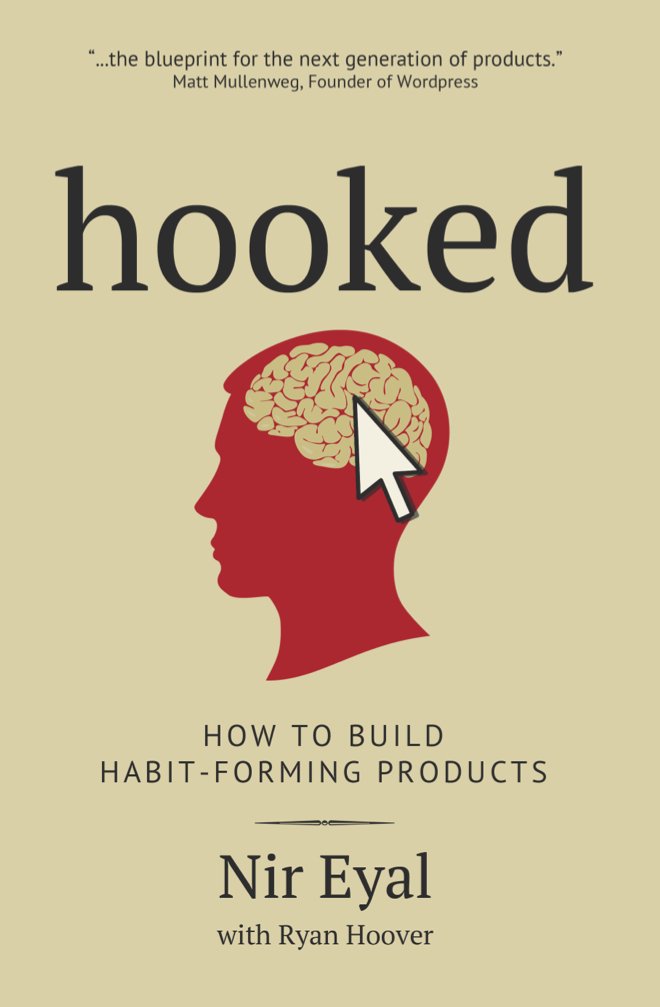 Written by Nir Eyal, Hooked breaks the characteristics of habit-forming products down to four main stages of a cycle: Trigger, Action, Variable Reward, and Investment. Triggers, which can be internally sparked (e.g., boredom) or externally sparked (a notification) are what starts the cycle and prompts the user to take an action. The user has to have both the motivation and the ability to act on a trigger.  Once the action is taken a habit-forming product will deliver a variable reward for that action. That reward could be social (a comment from a friend), objective (newly gained information or a purchase) or self-driven (a personal achievement like getting to inbox zero). Investment is the work a user has put into a particular app or product.  For example, I build 12 playlists and a full collection in Rdio, that outweighs any desire I'd have to try Spotify. Products that are habit-forming are exceptionally good at creating this usage cycle

"Take a human desire, preferably one that has been around for a really long time . . . Identify that desire and use modern technology to take out steps.” - Ev Williams

"...what draws us to act is not the sensation we receive from the reward itself, but the need to alleviate the craving for that reward." - Stanford professor Brian Knutson. Think about the moment after you click the notification and see who's commented/liked your post.

Stored Value: Switching to a new email service, social network or photo app becomes more difficult the more you use them. The non-transferable value created and stored inside these services discourages users from leaving. Stored value can come in the form of content (My whole music collection is on Rdio, so I can't switch to Spotify), data (Turbo Tax has my tax data for the last three years already), or followers (All my friends are on Facebook, why would I try ello?). Eyal also talks about reputation as a stored value (Uber vs. Sidecar) and Skills (past efforts used to learn the system).

The Endowed Progress Effect: In short, proximity to goal increases action. In an example cited by Eyal: "Two groups of customers were given punch cards awarding a free car wash once the cards were fully punched. One group was given a blank punch card with eight squares; the other was given a punch card with ten squares that came with two free punches. Both groups still had to purchase eight car washes to receive a free wash; however, the second group of customers— those that were given two free punches— had a staggering 82 percent higher completion rate." Linkedin does this, as does any site that tells you how close you are to a full profile.

Meghan Daum on Nostalgia, Aging, and Why We Romanticize Our Imperfect Younger Selves

"Life is mostly an exercise in being something other than what we used to be while remaining fundamentally—and sometimes maddeningly—who we are.”

How Gmail's Structured Data (Schema.org) Can Shape The Next Generation of Email Marketing

Shaping the next generation of email marketing is a bit hyperbolic, but it does explain how to send emails with simple "confirm subscription" or "add to calendar" actions from the inbox.

The world doesn't owe you any favors, Troy Dwyer. But I'm still going to retweet everything you ever write.

The City that is Moving Down the Road

This is from December, but I loved it enough to span two months.

A collection of photos from the Wood Island area in East Boston. You could lose track of time just looking at the details in each of these. Especially the neighborhood shots.

The Wire: Season 1
1) I know I'm absurdly late to this 2) Everyone is right about it. It's awesome.

Equalizer
Denzel, Boston, and vigilante justice.  I recommend, but then again, I like pretty much all action movies.

Invisibilia (podcast)
If you can't tell, I'm kind of on a brain science kick lately. Invisibilia "explores the intangible forces that shape human behavior" through a series of This-American-Life-Style narratives.